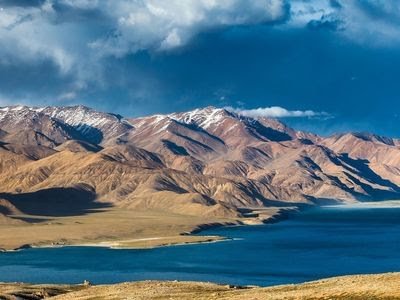 After Ladakh, Chinese army’s eyes on Pamir Of Tajikistan

: Recent articles in the state-controlled Chinese media have called for Tajikistan’s Pamir mountain range to be ceded to ChinaThis despite the fact that the two countries signed a border agreement in 2011
China is opening up another front in its relentless drive to expand its territorial claims. The latest target of the Communist Party’s seemingly insatiable expansionist agenda is the central Asian republic of Tajikistan.

More than 90 per cent of the territory of this Muslim majority country is mountainous.

Recent articles in the state-controlled Chinese media, which don’t publish anything without the prior approval of the Communist Party, have called for Tajikistan’s Pamir mountain range, which runs along the Tajik border with Afghanistan and China, to be ceded to China.

According to a report in the Times of India, these include an article by a Chinese nationalist historian who cited official sources to make the audacious claim that the entire Pamir region rightfully belonged to China and needed to be returned.

This despite the fact that the two countries signed a border agreement in 2011. Clearly, the Xi Jinping regime is now emboldened enough to pay scant respect to both formal agreements as in the case of Tajikistan and informal understandings like it has with India regarding the Line of Actual Control.

Part of the erstwhile Soviet Union, Tajikistan became independent in 1991 but the very next year it saw a civil war that lasted five years. Since then the country has been ruled with an iron grip by the dictatorial president Emomali Rahmon.

Because of its Soviet past, Tajikistan had remained in the Russian sphere of influence, but in the last two decades, there’s another giant, China, to reckon with which has much deeper pockets than Russia. China, which shares borders with more than a dozen countries, including Tajikistan, has ramped up investments in Central Asia.

In 2011, the parliament of Tajikistan ratified an earlier agreement to hand over 1,000 sq km of land in the Pamir mountains to China in return for debt forgiveness.

At that point, China’s foreign ministry spokesperson said the dispute had been solved “according to universally recognised norms of international law through equal consultations”.

Just how much debt China decided to forego is not clear, but land for debt has been an integral part of China’s expansionist tactics in many parts of the world, some of them thousands of miles from China’s borders.

Five years after that land-for-debt swap, Tajikistan, which continues to be heavily debt-ridden, allowed China to open a military base.

The Tajik government, however, is quite sensitive about the Pamirs, where some local communities tend to be restive. Last month, following the publication of the article by the Chinese historian, the Tajik foreign ministry called China’s ambassador to complain.

China has followed a policy of carrots and sticks with its other central Asian neighbours — Kazakhstan and Kyrgyzstan – as well. But under Xi Jinping, Beijing’s ‘wolf warrior’ diplomacy has acquired a menacing edge.

From India and Japan to Taiwan and countries in Southeast Asia, China is not adding to its friends’ list with its bullying tactics and bellicose behaviour. Tajikistan may be too weak to stand up to China, but a loose alliance of counties fed up with Beijing’s actions can start pushing the dragon back.