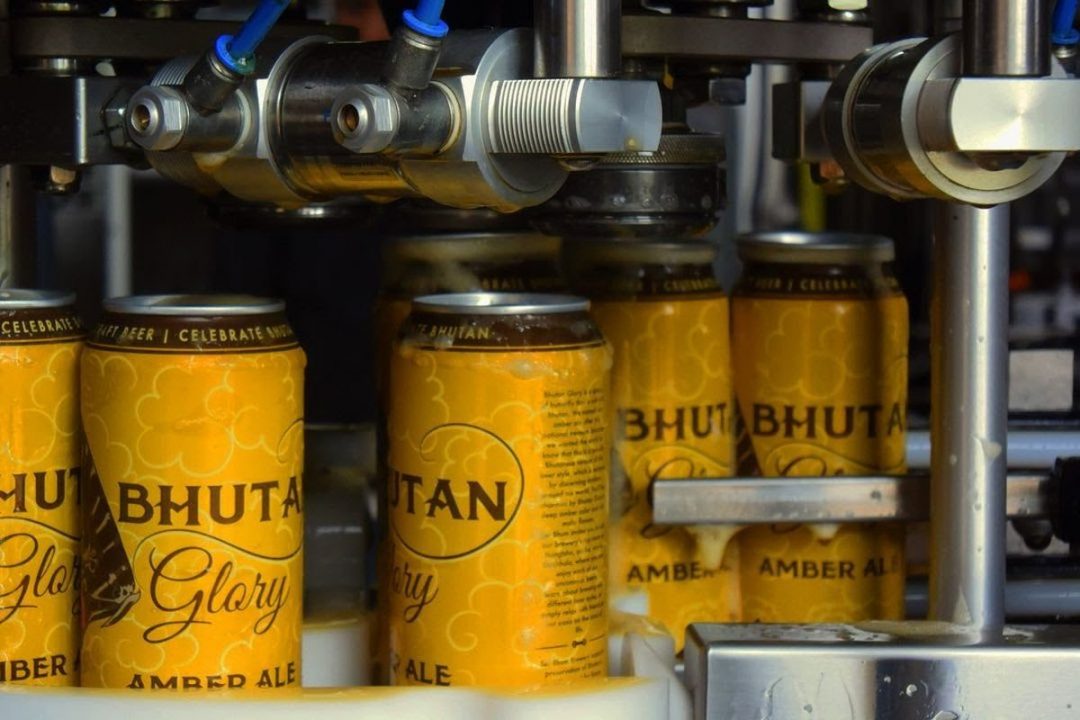 Bhutanese brewery Ser Bhum is behind Kati Patang, a beer sold by Delhi-based Empyrean Spirits. Launched in Zesty Amber and Snappy Wheat variants in 2018, Kati Patang prides itself on being “brewed with the happiest water on earth”.

One of the traditional drinks is Ara, a clear liquid made with barley, wheat and rice, and often served hot — something similar to makgeolli, a version of riced wine popular in South Korea.

However, the easy availability of illicit liquor means that death rates owing to alcohol are high and, naturally, the government discourages its consumption, taxing it at 100 per cent.

Given the difficult circumstances, the Ser Bhum Brewery has, in its own little way, taken up a substantial task: To change the way the country drinks beer.

Ser Bhum — which translates to “golden vase” — is only one of two craft breweries in Bhutan, a market dominated by Bhutan Brewery, which manufactures the Druk 11000, the most popular beer among locals and one of its major exports.

Ser Bhum, nestled in the scenic woods of Hongtsho, a 15-km drive from the capital Thimphu, opened operations in 2017. The choice of location was strategic: In the hills of Hongtsho, the brewery would have close and abundant access to clean, pure Himalayan spring water.

“The water in the beer is everything. It makes all the difference. It’s like the blood of the beer,” explains Sonam Lhaden, one of the founders.

Lhaden studied in the US and experienced America’s bustling craft beer scene firsthand.

“We had nothing like that in Bhutan. That got me thinking,” she says.

After elaborate planning — getting permissions took seven long years — Lhaden started Ser Bhum with her two brothers. One of them, Karma Tenzin, took up the role of master brewer.

Ser Bhum’s signature beer is the Bhutan Glory, a medium-bodied amber ale that comes with a caramel aroma and neutral bitterness. It also produces the Dragon Stout — an unabashed tribute to the country of its origin — which is a dark beer with notes of chocolate and coffee.

Both varieties, Lhaden says, have caught on with youngsters and the office-going crowd who, for long, sought a quality alternative to mass-produced beer brands in Bhutan. For the summer, Serbhum has also come out with a limited-edition honey-wheat beer made from locally sourced honey and available in kegs.

But the brewery is, perhaps, most famous for its India connection. Ser Bhum is behind Kati Patang, a beer sold by Delhi-based Empyrean Spirits.

Launched in Zesty Amber and Snappy Wheat variants in 2018, Kati Patang prides itself on being “brewed with the happiest water on earth”.

In Delhi, it’s taken off in cafés and restaurants, primarily for its fresh, clean flavours. “Our brewery is open to visitors. Many Indians who come ask to taste Kati Patang,” says Lhaden.

Ser Bhum’s latest Indian collaboration is the Beor360, a new beer that made its way into the Delhi market last month.

Founder Rishabh Ranjan spent much of last year scouting breweries all across Europe, but eventually chose Ser Bhum for its excellent water and unerring dedication to quality beer.

“With craft breweries, the master brewer takes care of intricate details that large commercial breweries don’t,” he says, adding that Tenzin is hands-on and extremely passionate about beer.

Moreover, managing the supply chain from just across the border is significantly easier when compared with importing beer from Europe.

Even so, Beor360 imports most of its ingredients from Europe, which are then shipped to Bhutan. Once the batches are ready and all the export clearances are secured, the beer takes three-four days to reach India.

The curious name comes from the Anglo-Saxon term for beer, and “360” is an ode to the intellectual beer drinker, someone looking to not get high but have a good conversation — evidently the principle that Ser Bhum follows with all its products.

For the likes of Beor360 and Kati Patang, Ser Bhum represents superior quality; for Ser Bhum, it’s a rare chance to go beyond its domestic territory.

“Because Bhutan is a small market, catering to just the locals is simply not sustainable for a craft brewery. You have to export,” explains Lhaden.

The Bhutanese government, while conservative in its view of alcohol at home, has been supportive of breweries such as Ser Bhum wanting to take their beer elsewhere.

Bhutan’s eagerness to do business with India is, perhaps, why a number of beer brands are seeking opportunities in the landlocked country. Last year, the Economic Times reported that craft beer brands like Simba, Arbor Brewing Co and White Rhino were exploring expansion plans in Bhutan.

Before Covid-19 struck, it was exporting some 1,000 cases every fortnight.

The number of cases pales in comparison to what a commercial brewery would normally produce, but such small batches ensure the consistency that people like Ranjan demand.

“When you’re selling a premium beer, you cannot be inconsistent. All batches must be equally good,” says Ranjan. After debuting in Delhi, he is planning to take Beor360 to Gurugram and Noida, and subsequently to Hyderabad, Mumbai and Chennai.

Success in the craft beer market in India, he reckons, will be determined by three factors: the quality of distribution, the strength of the supply chain, and efficient marketing.

“Like the US, we will see more craft beer brands come up. So, there’s still a lot of road to cover.”