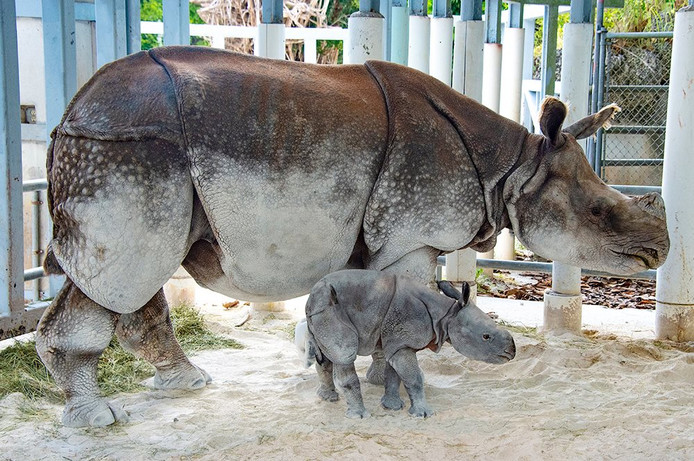 For the first time, a rare rhino was born by artificial insemination at the Miami zoo

The little rhino, whose gender is still unknown, was born at half past twelve in the afternoon and is the first little one of Akuti, a seven-year-old single-horned Indian rhino. The father is Suru, an eighteen-year-old Indian rhino. Both mother and baby are doing well. Both still have to be examined by a veterinary team which is only done when the staff consider it safe to separate the little one from his very protective mother for a few minutes, according to a spokesperson for the zoo.

Akuti (meaning “princess” in Hindi) did not get pregnant, despite several attempts at natural fertilization. That is why a team of experts was brought to the Miami zoo that started the artificial insemination process in January last year.

As soon as it became clear that Akuti was indeed pregnant, the rhino was trained to accept ultrasound. In this way the employees could keep a close eye on the growth and birth of the young.

Indian rhinos are on average between 15 and 16 months pregnant and the mothers can give birth to a calf once every two or three years. Akuti and her baby cannot yet be seen in public at the zoo, that only happens when the two are used to each other.

The Indian rhino is very popular among poachers because of its horn. There are approximately 3500 Indian rhinos in the world, according to the International Rhino Foundation. The Miami zoo is therefore very happy with the birth of the baby rhino: “This very rare birth is not only significant for Zoo Miami, it is incredibly important to the international efforts to maintain a healthy population under human care of this highly vulnerable species throughout the world.”

It is not the first time that an endangered species is artificially fertilized. Earlier, an elephant, a crocodile and a giant panda became pregnant via this route.