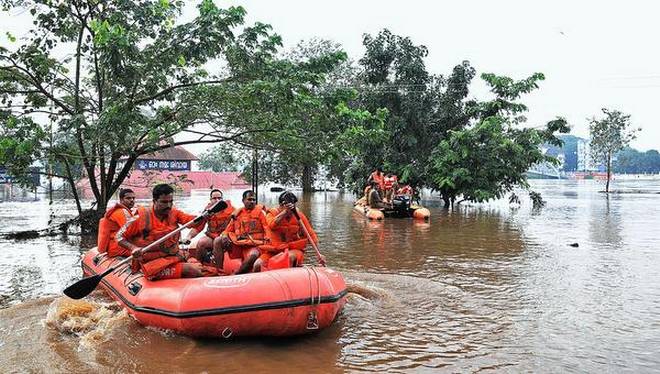 National Disaster Response Force personnel patrolling in the Periyar after the water level rose in the river.   | Photo Credit: H_Vibhu

The Indian Space Research Organisation’s satellites and Doppler radars played a key role in weather monitoring and forecast, and provided critical inputs for various agencies involved in the rescue of stranded citizens during the floods in Kerala last month.

Pointing out that most of the districts in Kerala — mainly Iddukki, Patthanmthitta, Ernakulam, Thrissur and Palakkad — had received more than expected rainfall with a deviation of more than 164% in August, the space agency said it had monitored the whole event through its various satellites, helping the prediction and safety measures.

ISRO not only extended support through its space-based sensors, but ground-based sensors as well. Two of its radars — one C-Band Polarimetric Doppler Weather Radar (DWR) at TERLS, Vikram Sarabhai Space Centre (VSSC), Thiruvanthapuram and one S-Band DWR at Kochi — were continuously monitoring the weather on 24X7 basis up to 500 km radius.

The data was transferred to IMD, Meteorological and Oceanographic Data Archival Centre (MOSDAC), and Space Application Centre (SAC) for further data analysis and centralised weather monitoring. The information was made available in near real time for the public through the MOSDAC and IMD websites.

According to a press release by the ISRO, the radars had helped in long range weather surveillance, forecast and nowcast of the weather and rainfall activity in Kerala. The National Disaster Management Authority and Kerala State Disaster Management authority were continuously monitoring the data received by the radar and images were continuously updated on the IMD website for making decisions on various activities.

The DWR system provides quantitative information in digital form — the intensity and mean velocity of cyclones along with rainfall rate and accumulation. It improves the understanding and forecasting of thunderstorm, hailstorms, tidal wave height, wind turbulence and shear as well as the probable intensity of rain in and around the region, the press note said.

The data, it said, had helped civic bodies in evacuation and rescue of stranded citizens during the floods. (Source: The Hindu)