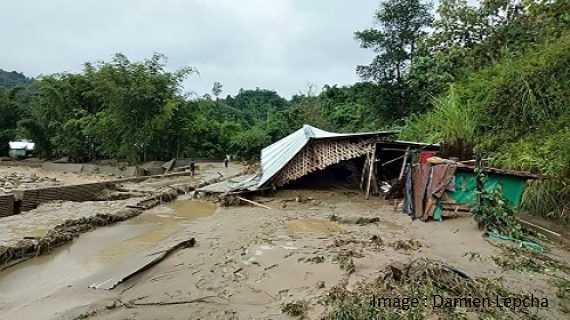 Landslides and flood struck two areas of Arunachal Pradesh capital Itanagar on Friday, claiming two lives, including that of a minor. Three others were reported missing.

According to official sources, the catastrophe was triggered by incessant rains for the past two days. Two persons were rescued by a search and rescue team. The incident occurred at Modirijo and Donyi-polo areas in the morning.

Water supply lines to capital region have also been badly affected. There were also incidents of landslides between Potin and Pangin portion of National Highway 13 near Aalo-Bam-Pusi-Doke-Tirbin, Hoj-Potin and some other parts of the state.

Chief Minister Pema Khandu condoled the deaths. He directed the district administration and the disaster management department to continuously monitor the situation. He also passed instructions for evacuation of people from vulnerable areas. He announced immediate release of ex-gratia payment of Rs.4 lakh each to the next of kin of the deceased.

Khandu issued directives to authorities to maintain vigil during the monsoon season to avoid human casualties and damages. He also gave strict instructions to ensure preparedness to tackle the catastrophe.