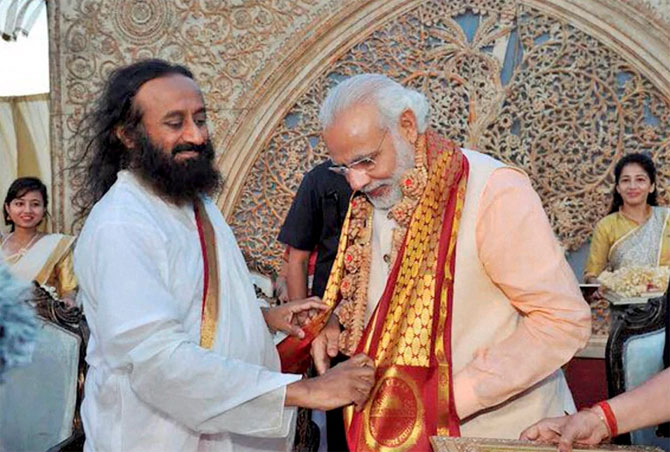 India looks less equal to China than 5 years ago, the strategic alliance with the US is hobbled by trade, and Pakistan is looking anything but chastened by Balakot.
What has gone wrong? asks Shekhar Gupta.

What is more overpowering, fear or love? You should be asking a psychologist.

What a columnist can do is to collect hard facts, sift them from fantasy and propaganda, and provoke an important debate.

Trolling, we take in our stride.

Not only did China block it for the fourth time, much inspired commentary in Chinese state or party-controlled media held out admonitions for India.

The rudest was a commentator in the Communist Party-owned Global Times who, with pictures of angry BJP workers in the background, accused Narendra Damodardas Modi of exploiting the situation for his election campaign, and concluding with a final insult: China is India’s friend, not a hostage to its nationalism.

With this, China redefined the ‘Wuhan Spirit’ to mean that if my troops aren’t squatting on your territory in the run-up to your elections, I have kept my part of the deal.More from around the web

For the rest, the old rules apply.

Two reactions to this Chinese arrogance stand out for their tone and emphasis.

India has been ridiculously guarded, not daring to even name China and expressing just ‘disappointment’ with ‘a nation’.

The Americans, on the contrary, had no such hesitations.

They named China in a statement enormously more severe than India’s pusillanimous one.

How Modi scored an own goal

It is just applied more selectively now, though not particularly with an application of mind.

We suck up to those who harm and humiliate us because we fear them.

We fight on with those who speak for us because we love them.

Here are the five follies of what we might call the ‘Modi Foreign Policy Doctrine’ that got us here.

1. Inability to appreciate that strategic alliances need a big heart

Strategically, America has been, to use a familiar Americanism, a stalwart ally.

Yet, at the top levels of the US administration, beginning with Mr Trump, a wary fatigue has developed about India.

It is tempting to dismiss Mr Trump as a petulant child.

But can you afford to do so? You might laugh at his fixation with Indian duties on Harley Davidson motorbikes, but he can also similarly call your Swadeshinomic approach to trade nutty and insincere.

Slashing prices of imported medications and medical aids is a good moral and political idea.

But must you implement it with sudden price controls and import restraints? The Americans must be bemused to see India declaring war on their Amazon and Walmart while it heartily welcomes Chinese investments in Indian e-commerce and digital financial services.

While the way America has stood by India after Pulwama is creditable, there are strains in the relationship and personal chemistry between Mr Modi and Mr Trump.

A bilateral hasn’t happened since November 2017 and attempts to set one up at the recent G-20 summit in Buenos Aires in November 2018 failed.

Mr Trump isn’t the kind to invest time in photo-ops and platitudes when his favourite peeves are not addressed.

A little ‘give’ on trade wouldn’t hurt India.

Mr Trump isn’t asking for something as difficult as troops in Afghanistan or to not buy those Russian S-400s or to shut the Chabahar port in Iran.

All he wants is a little concession on some tariffs and business as usual on the rest.

Mr Modi has erred in opening a Swadeshi trade front with Mr Trump, who also has a domestic political constituency.

See it this way.

The idea behind opening up our markets so widely to Chinese goods and investments may have been to give them an economic stake to moderate their strategic policy towards India.

Nothing of the sort has happened.

Two years ago, the Chinese walked into Doklam.

Now, the message from them seems to be, if we are not in Doklam or Chumar again, as you head for elections, send us a thank-you note. Likely on a Chinese phone, network, and operating system.

Just as with America, the Modi government has demanded all ‘give’, with China it is all ‘take’.

Mr Modi has stature and charisma.

But it doesn’t substitute the preparation and follow-up of professional diplomacy, and the need to refine policies through internal debate and discussion.

Also, individual styles and approaches of other leaders vary.

The Saudi crown prince might love a copious hug and take decisions on the spot, but a Xi Jinping may be irritated or misread it as fawning.

Besides, although the most powerful Chinese leader since Deng, he doesn’t have the personal power in Beijing that a Mohammad bin Salman or Mr Modi does in Riyadh or New Delhi.

Mr Xi works with a structured and empowered ‘system’ that functions a lot more effectively than the Modi Cabinet.

It is now evident that Mr Modi’s first charm-filled approach with Mr Xi was counter-productive, and this continued later through Xian, Wuhan and elsewhere.

The misstep of a Republic Day invite to Mr Trump and the failed hugging outreach with Nawaz Sharif showed inadequate homework.

4. The price of predictability

From politics, diplomacy, to warfare, sport and gambling, predictability is a liability.

Mr Modi has made that error.

Foreign leaders know his personalised style, need for publicity, photo-ops, praise, all of which they understand he needs for his domestic audiences.

The Chinese know very well by now that Mr Modi is wary of another intrusion in the months leading to the polls.

The Chinese also would have known that much as Mr Modi might like a little skirmish with Pakistan, which he could quickly end claiming victory, there is no way he could start and end anything with China like that.

Predictability makes it easy for others to guess your responses.

The Chinese have been the first to do this.

The Pakistanis must have taken note of a few things too.

They know Mr Modi is now publicly committed to a quick retaliation in the case of major terror attacks.

It gives them the power of orchestrating a crisis and drawing the world to the subcontinent at will.

All they need is to tell the ISI to unleash another incident.

Great leaders do not allow themselves to be ‘gamed’.

The Chinese were the first to exploit it.

They knew Indian fears of another intrusion in election season and offered reassurance at Wuhan, but on their terms.

Chinese trade dominance has increased, their view on Arunachal and Pakistan is harder, and India is reduced to protesting meekly on Masood Azhar, without daring to name them.

Do note that since Wuhan, India has not raised the issue of Nuclear Suppliers Group membership with China.

If India’s demand is now the banning of Masood Azhar, it does two things: Diminish India in its bilateral equation with China, and enable it to hyphenate its own India policy with Pakistan.

China, therefore, has India just where it wants, triangulated with Pakistan.

To conclude, this isn’t a foreign policy balance sheet of the five Modi years.

It is a listing of what we see as his most significant flaws and their consequences.