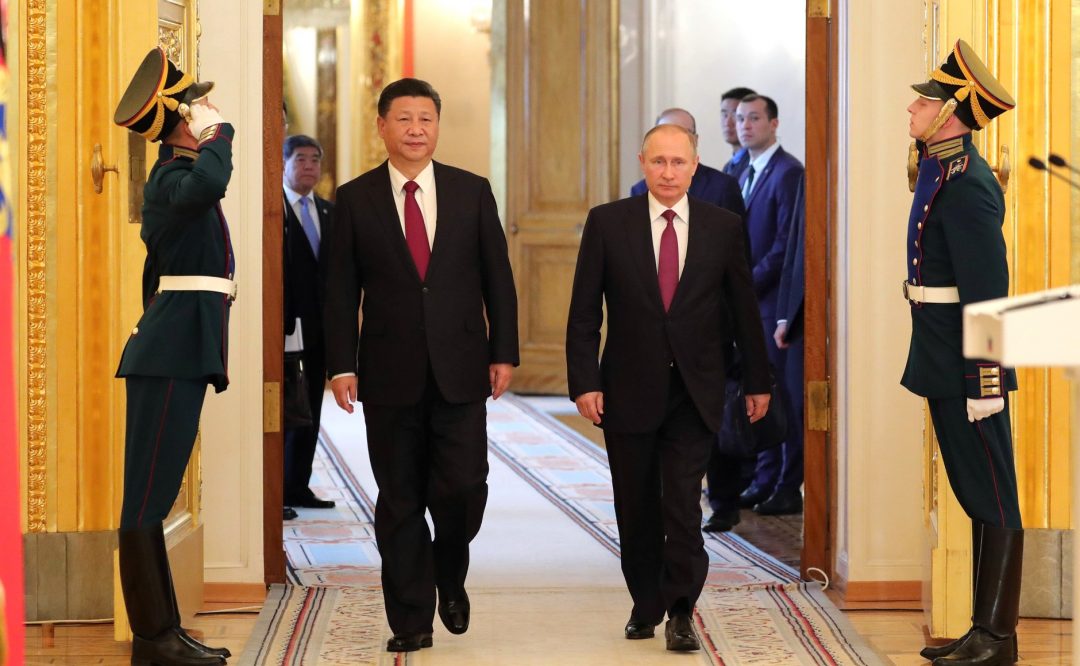 Over the last decade, the rise of authoritarian tendencies represents an increasing illiberal wave in international politics. Such a wave is not limited to smaller countries but increasingly typifies the political leadership and underlying nature of the international system’s foremost powers, in the guise of the United States (US), Russia, China and India, who are normalizing authoritarian-populism as a dominant global political phenomenon. In this regard, we must recognise that authoritarianism and democracy are not opposing political systems but are fundamentally inter-related on one continuum, whose characteristics co-exist and significantly influence each other.  China is at the vanguard of this phenomenon and provides a clear counterpoint to western liberal democracy. With western democracies heavily reliant upon China’s continued economic growth and facing significant political upheavals and crises, in particular, Brexit, the essence of the liberal world order may soon be on the verge of capitulation to China’s preferred authoritarian basis.

Authoritarian and populist tendencies are escalating in the international system, transforming the nature of domestic and global politics. Permeating the domestic proclivities of countries ranging from Hungary, Poland and Turkey, to Mexico, Brazil and the Philippines, ‘nearly six in ten countries … seriously restrict (their) people’s fundamental freedoms of association, peaceful assembly and expression’.  Authoritarian-populism is now also a shared phenomenon among the world’s most influential countries, and the rise of authoritarian tendencies among the great powers characterises an increasing illiberal theme in international politics over the last decade[2].

‘Anti-elitist’, assertive and nationalist-minded leaders all currently lead the world’s great powers – the United States (US), Russia, China and India – with each proactively proclaiming a common nationalistic goal of restoring their countries’ past glories and status. Via their economic, military and diplomatic strength, as well as substantial, growing and evermore vocal populations, it is these four major powers – more than any other countries – that will determine and delineate the foundations of world politics – and of the prevailing world order itself – in the decades to come.

A range of key factors critically binds these four leaders together; primarily their highly personalistic leadership styles, their desire for centralized political control, their appeal to mass public audiences, and their sustained intolerance of dissent. Of note too is that even before President Trump gained power, the US was downgraded to the status of a “flawed democracy” in the Economist’s Democracy Index 2016[3]. India holds a similar standing, whilst Russia and China are considered authoritarian. The Index bases its comparison across a range of factors, including the electoral process and pluralism, functioning of government, political participation, political culture and civil liberties, underscoring the commonalities between these countries.

Given the vital role that these great powers perform as the shapers and creators of global institutions – and therefore of accepted behaviours and practices in the international sphere – as they become more authoritarian in nature so too will the dominant world order. Moreover, how they understand, demonstrate and deploy authoritarian-populist traits via their autocratic leaders has the potential to threaten the stability of democratic societies throughout the world, including in Britain and the European Union. Critically, we need to see that authoritarianism and democracy are not opposing and exclusive political systems but that they are fundamentally inter-related on one continuum. In this way, there is no fixed, binary divide between democracies and authoritarian regimes but instead, they are essentially fluid, inter-connected and impermanent entities, whereby democracies can display particular authoritarian inclinations and vice versa.

Through a one-party state dating from 1949, the Chinese Communist Party presently rule with an authoritarian political basis that seeks to inhibit political pluralism, sanction political participation, imprison opponents (including political, ethnic and religious groups, most notably China’s Uighur population), and use state apparatuses to strictly monitor, control and command their population. China’s specific political nature relates to core elements of its specific world vision, in particular a set of desires pertaining to centralized control, territorial restoration and restored recognition, along with the continued impact of Confucian beliefs concerning harmony, peace, hierarchy, respect and benevolence – principally across East Asia. These various factors are informed by particular leadership styles, especially the more assertive and nationalistic Xi Jinping, who in October 2017 pertinently stated that ‘no one political system should be regarded as the only choice and we should not just mechanically copy the political systems of other countries’[4].

China’s authoritarian-populism is deep-seated in nature and is the hallmark of the country’s bureaucratic, legal and security institutions. These elements produce a political basis that critically contrasts to core dynamics integral to the current world order orientated around Western liberalism, as based upon democratic practices, tolerance, the rule of law, and protecting individual (rather than collective) human rights. As China’s stature increases, via the country’s ongoing economic, military and diplomatic rise, its global pre-eminence will allow the country to influence the functioning of the international system and threaten the predominant parameters of the current world order. This will allow for the realisation of Xi’s ‘Chinese Dream’ that ‘is a dream about history, the present and the future’, and inter-connects China’s longstanding values with its ambitions. By enabling a new world order, China’s supremacy in 1) economic, 2) institutional and 3) normative terms will be paramount and echo the country’s specific domestic values, which are deeply historically engrained in the mind-sets of its leaders, thinkers and people.

With China now possessing the world’s largest economy[5], it is acquiring a system-determining capacity that allows it to cast its own vision of authority, order and control throughout the contemporary international structure. The country’s gradual embrace of liberal economics – often merged with specific Chinese values and characteristics based upon state control and a blurring between public and private ownership – has given it this ability. This has resulted in an economic system defined as being authoritarian-capitalism that diverges from the western liberal economic ideal. In addition, China’s ever-increasing demand for resources, markets and energy has made the world’s composite national and regional economies dependent upon it as a major import and export market, cheap labour provider and fruitful foreign investment destination[6].

Beijing’s wild success in rapidly transforming the economic fortunes of its population, pulling hundreds of millions out of poverty and conducting its international trade in a non-ideological manner, also acts as an inspirational developmental model for countries across Africa and Asia – particularly those with authoritarian regimes. By doing so, China deeply questions the legitimacy of western liberalism’s declaration that economic growth inevitably leads to democracy, and – by presenting a viable alternative to it – shows that such a world order can be usurped and replaced.  Beijing’s planned Social Credit System[7], which will come into force in 2020, inter-links educational achievements, financial behaviour and social media activity to produce a transparent and publicly available social score, will extend the Chinese state’s capability to control its people.  The technologies central to this control are being exported to other countries[8], and their underlying principles are evident in the west, such as for credit scoring or screening terrorists[9].

By binding members together around particular values, practices and understandings, and providing their instigators with a managerial role to govern and regulate international affairs, multilateral regimes aid the creation and maintenance of world orders. Such institutions innately reﬂect the specific interests, concerns and values of their creators, and are vehicles to disseminate particular visions of the world onto the global stage, as displayed by the western-originated International Monetary Fund, World Bank and United Nations. For most of the latter half of the twentieth century, these institutions encapsulated the US-led vision of a western-orientated world order resting upon an image of international security via liberal free trade and democratic politics.

Underscoring this system-ordering potential, and also its differentiation from existing groupings, China’s beliefs concerning multi-polarity, global governance, human rights, peaceful development and non-intervention are engendering a new form of world order. China’s creation of different regimes, such as the Asian Infrastructure Investment Bank (AIIB, a multilateral development bank founded in 2015), and the Shanghai Cooperation Organization (SCO, a Eurasian security organization initially initiated in 1996), encapsulates how its differing attitudes are inculcating a Chinese-led world order. Such an order inherently challenges rival western institutions, and – by extension – the very liberal values upon which they have been crafted, imagined and legitimized.

Drawing upon how leading great powers not only create world order but also provide leadership, as well as territorial, ﬁnancial and existential security, a Chinese world order would necessarily change the very conduct and nature of global affairs. China’s domestic identity, history and behaviour pertaining to the acceptance of an autocratic and benevolent form of single- party rule all critically inform this discussion. So too do the wider realization and enactment of the notion of tian xia (“all under heaven”) that seeks to create a China-centred world order that is built upon tenets of hierarchy, paternalism and harmony in its various diplomatic relations across the world.

China’s underlying indigenous authoritarian values, practices and ideas have already altered the structure and workings of the international system, and as China becomes increasingly influential and powerful, they will lead to further significant transformations. Moreover, because authoritarian-populism is increasingly present in the politics of the great powers – as well as in many medium and lower tier countries – it acts as an enabling and legitimizing mechanism for China’s worldview. Such a convergence, accompanied by the weakening of western liberalism, the challenge that China poses to it, and the US’s continued retreat away from leading global affairs, illustrates how China’s authoritarian world order is becoming both feasible and achievable.

The international system is currently experiencing a period of transition as economic, institutional and military power is being amassed by China, which is depleting the relative influence and stature of western countries and their associated values and worldviews. Moreover, Beijing is now able to articulate an alternative vision of world order premised upon different economic, institutional and normative conditions that are becoming increasingly legitimate in the eyes of many world leaders. Growing authoritarian and populist traits across the world – and its dominant great powers – accelerate this trend, as do pressure from domestic populations negatively affected by globalization, increased migration and growing economic disparities.

To effectively counteract the risk posed to their country by the authoritarian-populist wave, leaders in the UK – particularly in the context of Brexit – must remain aware that political systems are inter-connected and evolutionary in nature, and that such systems are all highly susceptible to: