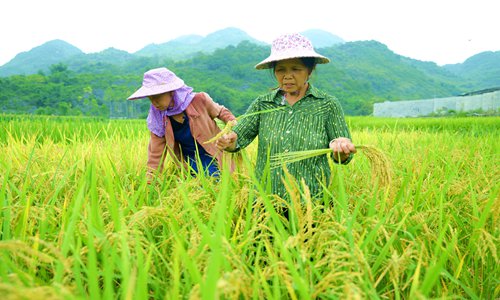 China’s grain production is decreasing, due to reasons such as government efforts to improve grain quality, natural factors and the relatively low productivity of domestic farms, experts told the Global Times on Sunday.

The total grain yield in China this summer reached 138.72 million tons, down by 3.06 million tons or 2.2 percent compared with the previous summer, data from the National Bureau of Statistics showed on July 18.

The sowing area for summer grain also decreased by 0.6 percent on a yearly basis to 26.703 hectares this year, the NBS data showed.

Jiao Shanwei, an analyst at cngrain.com, said that the government is encouraging farmers to replace low-value agricultural products with high-value grain varieties, which might cause a drop in production of some grains.

Weather is another important factor. According to Jiao, the drought in Northeast China caused a delay in the sowing of corn in spring this year. And the high temperatures in the summer impeded corn production, he told the Global Times on Sunday.

“I am not optimistic about the overall grain production scale this year,” he said, while adding that the drop should be a temporary phenomenon.

Ma Wenfeng, a senior analyst at Beijing Orient Agribusiness Consultancy, told the Global Times on Sunday that in China, land is often cultivated by a lot of different farmers rather than large farms that might be able to introduce high-tech processes. This means that large-scale, standardized production is rare in domestic farming, which in turn has restricted production.

According to data released by the NBS on Friday, almost all major agricultural products, including wheat, corn, beans, peanuts and soybean meal, saw their prices rise in mid-August compared with early August.

Only cotton’s price decreased slightly during the period.

But Jiao pointed out that China’s grain price is still kept at a very low level. “Rice prices are at the lowest point in eight years, and the price of wheat is also relatively low,” he said.

According to Ma, the government in recent years has tried to suppress the price of grain in order to control the pace of inflation, but the increase in prices of other products like pesticides and rising transportation costs makes life difficult for domestic farmers.

“I think the government should increase the basic pension for domestic farmers, so that they can rent out their land for mass production,” Ma said.

Jiao said that this year the government hasn’t acquired as much grain as in previous years, and food processing companies did not have enough money to fill in the purchasing gap, which is why grain prices are still low despite the drop in production.