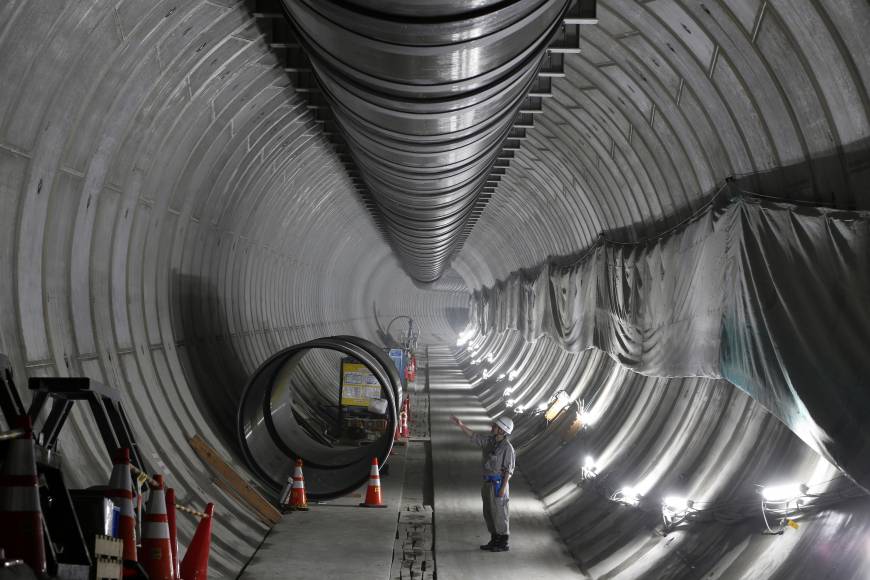 Expanding the Role of Sewerage Systems for Affluent and Dynamic Lives

History
The construction of sewerage systems in Tokyo dates back to 1884,
when the Sewer System in Kanda District was constructed, and this
was Japan’s first project for modern sewerage systems.
About 110 years after the Kanda Sewer Works, as of the end of March
1995, the sewered population rate in Tokyo reached essentially 100%
in 23 Ward Areas of which population is about 8.5 million.

Tokyo Metropolitan Government, TMG, also carries out the construction
and management of sewerage systems for cities and towns in Tama Area
of which total population is about 3 million, and the sewered population
rate in this area reached 97% in 2004.
With the progress of sewage works, the water quality in Sumida River,

which runs through Tokyo Metropolitan Area, has been greatly improved,
though the water quality in the Sumida River was seriously deteriorated
due to the economic growth in Japan in 1960’s

Fig Water Quality of the Sumidagawa Rivver and Sewerage Construction

to age with changes in socioeconomic conditions, city structures, and
environment. The fundamental roles at presentare:
1) Improving the living environment by drainage and treatment of
wastewater
2) Preventing floods through removal of rainwater
3) Preserving the water quality of public bodies
In addition to these fundamental roles, sewerage systems are expected to
perform additional other roles. A rich and comfortable water environment

should be performed through the promotion of sewage works, and TMG conducts
several new sewerage projects such as reuse of treated wastewater, advanced
wastewater treatment, conversion of sludge into resources, utilization
of thermal energy contained in wastewater as a heat source using heat
exchange technology, optical fiber communication cablechannels installed
in the upper part of sewer pipes.

Recently, Ariake Wastewater Treatment Plant, WTP, one of the newest WTP
in TMG, has started its operation, and it has been characterized by advanced
wastewater treatment, pressure wastewater collection system, utilization
of upper space on the roof of covered WTP as playground, ozone-treated
wastewater, etc.

Tokyo’s sewer, which has been constructed for the past 120 years, has

deteriorated due to aging and external influences. At present, the total

length of the sewers, which have exceeded legal service life, is about

Under these circumstances, TMG has promoted reconstruction and
renovation of sewerage systems. In conjunction with reconstruction,

improvement of capacity of sewer system and/or WTP, introduction of
advanced wastewater treatment, multi-purpose uses of resources and
facilities like Ariake WTP, etc. have been performed.

Sewerage Systems are very effective for flood control. However, even

in sewered areas, floods have occurred in recent years. The cause of

and increase of stormwater runoff due to rapid urbanization. Floods

caused in this situation are called “urban flooding”.

To cope with urban flooding, TMG has carried out several projects with
following measures.
(1) To augment the capacity of sewers and pumping stations and
construct rainwater storage tanks in areas where the rainwater
runoff exceeds the capacity of existing sewers.
(2) To promote installation of rainwater storage and infiltration
facilities to control the inflow of existing sewers.
3) Improvement of Combined Sewer System
In the combined sewer system, which covers 82% of the total planning area
in Tokyo, both rainwater and wastewater are transported in the same pipe
during wet weather, and part of this is discharged into receiving water
bodies without treatment. This is called Combined Sewer Overflow, CSO and
it causes serious water quality problems.

To cope with CSO problems, TMG is now expanding intercepting
capacity from the present double volume of dry weather to triple
to increase the volume of wastewater guided to the WTP.

Moreover, a CSO storage tank is installed to prevent polluted first flush,
which occurs in the early stage of rainfall. TMG are sldo installing
screens to prevent rubbish, etc. at the rainwater outlets.