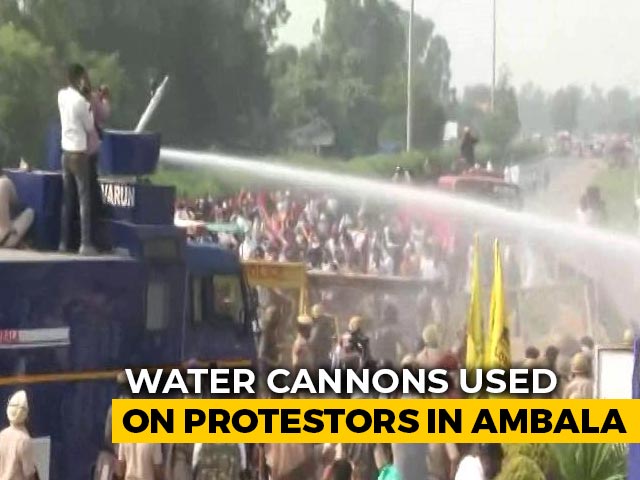 Thousands of protesting farmers scuffled with police during a march against new laws, which they fear will benefit corporations.

Protesting Indian farmers scuffled with police on Friday during a march to the capital, against new laws, which will make it easier for farmers to sell their produce directly to private buyers and enter into a contract with private companies.

But farmers demand the bills, passed by India’s parliament in September, be scrapped fearing the laws will leave them vulnerable to big corporates.

Television footage showed plumes of smoke and some people throwing stones at police as thousands pressed against barricades, waving flags and sticks. Some rode tractors near the barriers.

Farmer leader Sukhdev Singh told Al Jazeera over the phone from Narwana, Haryana, they will continue marching towards the national capital no matter what.

“If the government thinks that it is going to stop us by using force or blocking the roads, that is not going to happen. We will reach Delhi no matter how much time it takes,” he said.

“This government doesn’t care about the farmers. It’s trying to destroy us and help big corporates.”

“We don’t want to jam the roads. We just want to march to Delhi but it’s the government which is resorting to violence and blocking roads and causing inconvenience to people.”

India farmers’ protest
Flames emerge from tear gas released by the police to stop farmers from entering New Delhi [Danish Siddiqui/Reuters]
Another protesting farmer Sukrampal Dhayana said the police tried to stop them with force, barricades and water cannon, but farmers have “decided to stay the course to make sure the government listens to the voice of millions of farmers”.
Suburban train services into New Delhi were suspended, Delhi Metro said in a post on Twitter, in a bid to stop the protesters from riding the trains.

“It’s barbarism. Using the border security force against your own people,” said Sainath, the founding editor of People’s Archive of Rural India, an online portal focusing on rural issues.

The clashes come a day after police in New Delhi’s neighbouring state of Haryana, governed by Prime Minister Narendra Modi’s Bharatiya Janata Party (BJP), used tear gas and water cannon to disperse the farmers who tried to march towards the capital.

The farmers, most of them from the northern state of Punjab, were able to break the police blockade and marched to the New Delhi border on Thursday, but they are not being allowed to cross into the capital.

Al Jazeera’s Elizabeth Puranam, reporting from New Delhi, said that police are citing the record high number of coronavirus cases in not giving permission to protest organisers, but that hasn’t stopped thousands of farmers from neighbouring states trying to reach Delhi for the second day.

“They are determined because they want the government to repeal laws they say take away guarantees prices around their produce and leave them at the mercy of private investors. This is a huge issue in India.”

Earlier a police request to use stadiums as temporary jails was rejected by the city authorities, according to local media.

India farmers’ protest
People move away from tear gas released by the police at Singhu border [Danish Siddiqui/Reuters]
Under the laws Modi called a watershed for agriculture, farmers are free to sell their produce anywhere, including to big corporate buyers, instead of at government-regulated wholesale markets where farmers are assured of a Minimum Support Price (MSP) – the price at which the government buys farm produce.

The laws also allow farmers to enter into a contract with private companies in a step the government hopes will bring private sector investments in the sector that has struggled for years.

Many farmer organisations and trade unions oppose the new law, saying it would leave small growers with little bargaining power. They also say they fear the government will eventually withdraw price support (MSP) for wheat and rice.

The government says there is no plan to eliminate the wholesale markets.

Agriculture accounts for about 15 percent of India’s GDP but employs nearly 60 percent of its population.

The government says the new laws are aimed at making the vast agriculture sector more efficient by freeing up farmers who want to sell directly to big retailers such as Walmart.

Critics, however, say the changes will end the purchase of grains at prices guaranteed by the government and leave farmers vulnerable to the market.

“They rushed through the farm bills and the labour bills. There was absolutely no reason to focus on the farm and labour bills at this time when you got a pandemic,” Sainath told Al Jazeera.

“They [government] did it because they thought this is the time to do it and these people [farmers] cannot organise and protest and that is how they pushed them through the parliament.”

The governing BJP party has accused the opposition Congress party, which governs Punjab state, of misleading the farmers.

“The opposition parties particularly the Congress party is misleading farmers about the laws. They are saying that MSP will be abolished which is not true, MSP is already existing even after the legislation was passed by the parliament,” Syed Zafar Islam, the BJP Spokesperson, told Al Jazeera on Thursday.

“We took the farmers into confidence before passing the laws.”

Farmers in several regions of India, particularly in Punjab and Maharashtra state, have been facing a crisis in recent decades with a cycle of drought, failed crops and indebtedness.

In 2019 alone, 10,281 farmers and farm labourers committed suicide, according to government data.