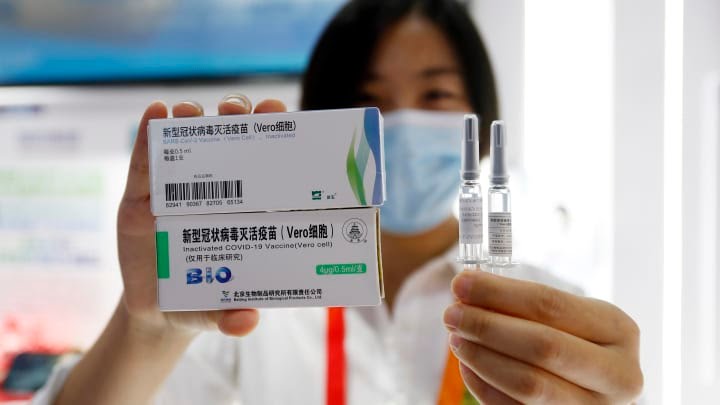 An exhibitor shows inactivated COVID-19 vaccine candidate from China National Biotec Group of Sinopharm Group during the 2020 China International Fair for Trade in Services at the Beijing Olympic Park on September 5, 2020 in Beijing, China. Getty Images —- Developing countries may have face a long wait if they want a vaccine developed in the West, but there’s always the option of turning to China, says an economist from DBS.
Beijing’s willingness to provide vaccines to developing countries adds to the appeal of the China’s vaccines, said Taimur Baig of DBS Group Research.
China has not released much data on the efficacy of its home-grown vaccines and not a lot of scientific information about them is readily available.

By Han Haidan | China News Service —
SINGAPORE – Developing countries may face a long wait if they want a vaccine made in the West, but there’s always the option of turning to China , says an economist from DBS.

“Considering the billions of doses needed, and the risk [of] falling at the back of a very long line for Western vaccines, the appeal of the Chinese vaccines is apparent,” Taimur Baig, chief economist and managing director at DBS Group Research, said in a note.

There will be a rush to procure Western vaccines when they’re approved by regulators, and poorer countries may find them unaffordable.

According to Citi, developed countries have collectively secured 85% of total bilateral pre-orders of coronavirus vaccines. Countries such as the U.S., U.K., Australia, Canada, Japan and those in the European Union have ordered supplies that exceed their populations, Citi said.

China has five home-grown vaccine candidates in phase three trials, according to the Ministry of Foreign Affairs. That’s usually the last step before government regulators vet the vaccine for approval.

Sinopharm, or China National Pharmaceutical Group, reportedly submitted an application to Chinese authorities last week seeking approval. The firm has two vaccine candidates, but it’s unclear if both are being considered for regulatory approval.

Beijing has already promised to help countries including Cambodia and Malaysia.N

‘Unconventional’ approach
Based on late-stage trials, Moderna as well as Pfizer-BioNTech announced this month that their vaccine candidates are more than 90% effective against Covid-19.

China has not released much data on the efficacy of its home-grown vaccines, and little scientific information about them is readily available. The state-controlled Global Times this month published a story touting China’s vaccines as “very effective.”

According to Reuters, the country has allowed three vaccines to be given to limited groups under an emergency use program. Nearly one million people have received an experimental vaccine developed by Sinopharm, Reuters reported, citing the company.

Such an approach is “unconventional,” said Dale Fisher, a professor in the National University of Singapore’s Yong Loo Lin School of Medicine.

“It is normal to wait for an analysis of phase three trials before ramping up a vaccine program through emergency use authorization,” said Fisher, who is also chair of the World Health Organization (WHO) Global Outbreak Alert and Response Network.

Fisher told CNBC in an email that said such a move would be “unacceptable” in the West, but could fast track learning about the virus if there is good surveillance of those vaccinated.

“They will obtain a lot of data doing it this way, but it can be difficult to interpret in the absence of controls,” he added.

Phase 3 trials are best at determining the efficacy of the vaccine and the duration of its effectiveness, he said.

Chinese pharmaceutical companies have relied on older methods than Moderna, Pfizer and BioNTech, which use messenger RNA technology. The latter’s production process is more capital-intensive, and the vaccines need to be stored at extremely low temperatures, said Baig.

“Hence, [Chinese vaccines] are likely to be cost competitive and logistically easier to handle,” he said.

Additionally, China has signed agreements to test and produce vaccines in countries such as Indonesia, Pakistan and Mexico.

Beijing also joined Covax, a vaccine alliance backed by the World Health Organization, which seeks to grant equal access to all participating countries when a vaccine is developed. The goal is to provide a lifeline to lower-income countries who would not have been able to afford these vaccines otherwise.

Baig said China needs a “big diplomatic, image-boosting win” in 2021. That could include debt-rollover or partial forgiveness for poor countries.

“But a far wider-reaching move would be to aggressively produce and deliver vaccines worldwide,” he said, adding that the bank expects a lot of “vaccine diplomacy” from China next year . 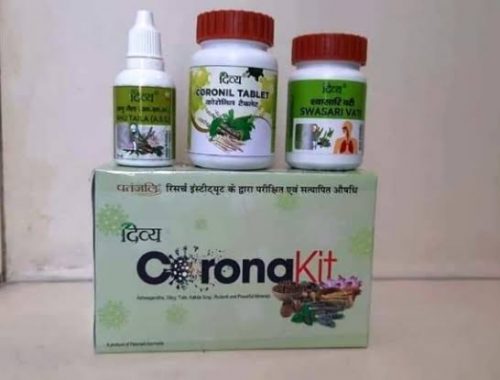 Ramdev’s Patanjali claims to have Covid-19 medicine, 100% recovery in 7 days 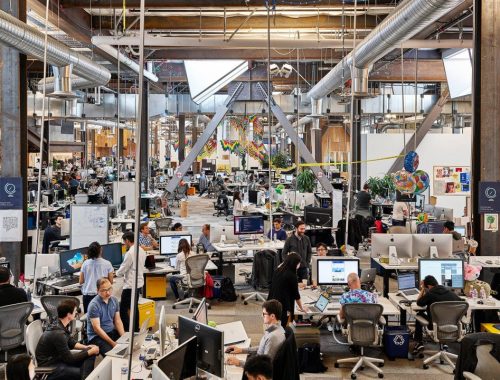 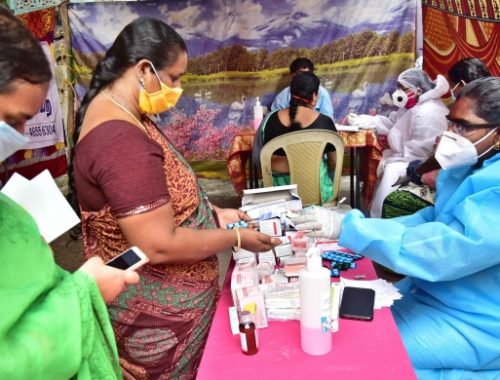